I Can't Believe I Cheated

I admit.
I cheated.
On a man.
And I don't cheat - I've actually never, ever cheated on a man in my life. That's just not me.
So, technically...

I cheated on Dominique Ansel by having.... a dossant. Yes, the hybrid dessert of doughnut meets croissant aka Cronut. (Even so Cronut is a trademarked name and recipe, but it doesn't stop bakeries from trying to emulate it - and I really, really wish people would just stop trying to do so.)
With all of the Cronut hype, I had to try this "dossant" because I find the dessert club, "ChikaLicious" very tempting. On most occasions, I really enjoy their offerings... 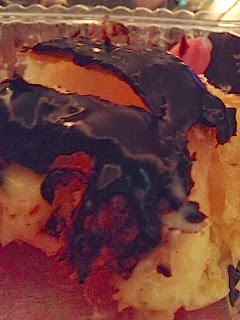 But alas, this dossant-thing wasn't anything to compared to the beloved Cronut.

This version is more like a Boston Creme Pie doughnut combined with a croissant-like pastry base. It was very, VERY heavy on the vanilla creme - which is tasty all by itself, but I didn't like it swimming inside. Especially when it makes everything all gooey. It didn't have the flavor either - it was just sweet - no layers or hints of another essence, and the texture was a turnoff. Just plain sweet and swimmy with very little good to say about the attempt.

So rather than cheating, I felt like I had been cheated. It was as if I had my fine bone china swapped with stoneware.
The disappointment and overall let down was extremely palpable.

So please! Just stop it, bakeries of the world! STOP trying to mimic the Cronut! It's not yours to discover! Find something ELSE that brings you joy. Quit cheating the public with your wannabe knockoffs and get your own signature style.
AND! For the RECORD: While I might have a crazy love affair with the Cronut myself - I know that a lot of it is mostly enticing because most of us cannot get one WHENEVER we want. There's planning and strategy involved.... And truth be told.... seriously, I love the DKA much more.
The DKA can be bought and eaten up to 2 days later... and it is still delicious. I get a few at a time - bring them home. I will have one right away, but the next couple of days, I'll have breakfast -just warming one up briefly in the toaster oven and life is grand.

There. I said it. I prefer a DKA over the elusive Cronut.

Cronuts have a short shelf life (if any at all) and must be devoured on the spot for the best experience.
But even if you can't get the real deal Cronut, don't cheat yourself with buying something that someone is attempting to tell you it's "just like the SoHo bakery version" - they are just robbing you of your dough with their Faux-nut.

Think about it - I mean, how do you really REALLY feel about imitation crab? Does it taste better when it's called "surimi"? Don't be fooled: because a Cronut by any other name may sound better, but it's just not.