A Cheerful Event to Start the Season 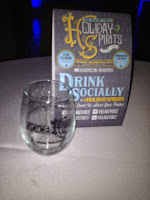 The Village Voice hosted its first Holiday Spirits event on the 80th anniversary of the repeal of Prohibition - pretty good reason to celebrate, right?

Luckily, I had a ticket to attend and sample over 40 different spirits, cocktails and alcoholic infusions from more than 20 different distilleries,
breweries and wineries - but no, I didn't get a chance to sample ALL of that, but I could have... if I weren't such a lightweight.

It was a relatively casual affair - only a couple of people showed up like they were going to a movie premiere, but for the most part, everyone took a smart, casual approach to a an evening in Long Island City. The passed hor d’oeuvres were pretty sparse and not exactly what I would have expected with that much alcohol available -because let's face it, you need to have something to eat if you're going to indulge in so many potential tastings. 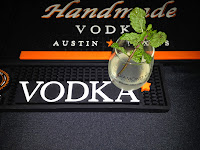 So I kept my samples really, really light.

What I enjoyed was learning about all of the different types of spirits available and I actually discovered tequilas and vodkas that I really and unexpectedly liked.

For example, my first tasting was Tito's Handmade Vodka - they made a cocktail of said vodka, elderflower liqueur, fresh lime juice, ginger beer and topped off with a fresh sprig o' mint. It was one of my favorites.

So while I've never been a vodka drinker in the past, I gave it a chance. I liked it. Because of this event, I might be more apt to try another vodka drink without doing an automatically generated sour-puss face. No guarantees, but -just less likely to do an immediate thumbs down to the Russian drink staple in the near future.

I also sampled a spiced wine that took me back to Christmas markets in Europe. If you know and love Gluehwein, you'll like this Holiday Spiced Wine from Brotherhood Winery -which is America's Oldest Winery.

Surprisingly, I also learned that I'm not a big Mezcal fan -not as far as a drink. Maybe as something to use as an ingredient for cooking... but since I am not a fan of being in the kitchen, I'm not exactly the best person to know how to create recipes... I can only imagine that Mezcal might be a good additive to a smoky barbecue marinade for short ribs or something of that nature. But what do I know? Oh! I liked their logo for El Buho Mezcal! It was adorable. But the “Night Owl” cocktail, not so much. And I had high hopes and thought, ooooh! Something smoky sounds delicious. I was very, very wrong.

Alcoholic drinks, in my own mind, are treated like Art: I know what I like, I know what I don't like. If someone else really loves a chardonnay from Long Island, that's great... but I may not be. And you know what? That's ok!

I also liked the Brooklyn Winery's take on a pinot -especially when paired with chocolates. I think probably every drink should have been paired with some sort of food item -as it would have made a bit more sense for the event as a whole.

The full list of the available drinks can be found here. I tried less than 1/3 of them - and my photos were just very poor due to the low lighting of the space. However, a great time to be had by so many attendees!

In fact, I really do hope that The Village Voice puts on another Holiday Spirits rendezvous again next year - they did a fabulous job with not having the place overly crowded, the music was really good (live DJ on one floor and a live band on another), the space was great for the venue and there were a lot of drink options. What I would have liked to have seen: more food/small bites and a rinsing station for the tasters glass. Yes, I really like the environmentally friendly glass, but without having any way of rinsing between vodka, wine and smoky Mezcal it became an issue for a lot of tasters without options.

In summary, the experience at Holiday Spirits was educational. It wasn't a booze fest by any means. People mingled and talked about small-batch distilleries and had an opportunity to learn more as well as support some local markets. Thanks to everyone who made it possible. Cheers!