Putting a Spin on Chicken and French Cuisine 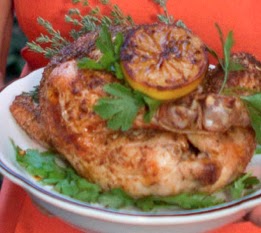 Georgette Farkas, the owner and creator of a restaurant with her own namesake has been a concept since Ms. Farkas was a young girl. This is not a "fly by night" operation, it's literally been decades in the works. Ms. Farkas has a flair for the luxury and a penchant for all things refined. Sure, it helps that she was also an integral member of Daniel Boulud's team - running the public relations for all of his restaurants for 17 years combined with her Harvard degree.

Georgette's entrepreneurial calling is inspired by memories of meals she enjoyed in France as a child. The menu at Rôtisserie Georgette's is centered around
spit-roasted chicken and rustic French side dishes. However, lamb, fish and duck as well as other perfectly prepared meats are available.

While dining, I enjoyed the roasted chicken, poulet roti, with the Provençal jus. Sides included the baby brussel sprouts with pancetta and a "stuffed, crisped and truffled" baked potato. It should go without saying: This is NOT Kenny Rogers' Roasters! Not only was the meal succulent, but the atmosphere made me feel like I was fine dining in the south of France. Yes, I like that sort of thing.

My husband had the lamb -and quite frankly, it just melted in your mouth. I was torn between which dish I liked more -but really, the "jus" with the chicken kept speaking to me. It was a sort of personal relationship I had going on with food that night. I'll admit, I was a bit surprised that it was THAT good. Initially, I thought, "Ok, roasted chicken... sounds good... but I'm not expecting spectacular" -but what I ended up tasting was delectable AND spectacular. Chef David Malbequi is classically trained and has quite the impressive resume. You shouldn't leave Rôtisserie Georgette feeling hungry.

Prices are fair for the location and level of service. The cocktail and wine list is also remarkable and noteworthy. I had a 2010 Gamay - can't complain there! There's something about the Portuguese azulejo tiles that bring a warmth to this new restaurant, too, but it is the quality of the food that will bring you back.

What would you have chosen on the menu? Chicken, lamb, fish or duck? Or would you go for a vegetarian meal? I'd like to hear about your experiences as well!