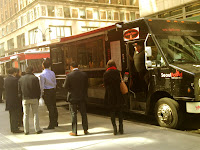 I really do love food trucks -as it provides an opportunity to sample a different food you might not otherwise have access to in your neighborhood.

Since I also monitor Twitter to see what's going on with NYC Food Trucks, I thought I'd see if there was anything around my office the other day for a bite to eat.
I found Seoul Food was about 10 blocks away and it was beautiful and sunny outside. I quickly put on my sneakers and got myself in line for some Korean food.

Online, @SeoulFoodNYC tweeted that the special phrase of the day was "Wild Wednesday" - so I approached the truck asking what that meant. I was told that it "depends on what you order." Ok, fine. Apparently in my case, I got a free order of fries. I already spent over $10 on a sweet and spicy pork Bibimbap, so nothing really felt "free" - as I think the prices are pretty high, all things considered.


Oh wait - I should also mention that I spent a good amount of time in South Korea and have been to some really good, authentic restaurants in NYC's Koreatown, too.

When I took the trip back to my office, I quickly opened up the Bibimbap. It really looked beautiful. I specifically requested "NO onions" -as raw onions give me a headache.... Not that any of you care, but it's important to mention because they, of course, had a huge helping of them (hiding on the right corner of the photo - under the meat). Gee. Thanks.

However, I found that the sweet and spicy pork was tender and tasty -but it was only sweet. No kick. No spice. At. All. There were small amounts of veggies but a HUGE HUGE helping of brown rice. I didn't want or need the extra helping of carbs. And the kimchi that I was so looking forward to, was barely a part of the dish. Whaaaaat? This is Korean cuisine with a microscopic portion of the country's signature dish? Are you kidding me?

There was also no egg topping the dish, which is a usual addition to Bibimbap, but not here.
Everything was just lacking in flavor and not at all what I had hoped for. I ended up with a lackluster experience overall. If you check Yelp reviewers, you'll see that many of them had the same or very similar experience.

On the plus side, the guys at the truck were very friendly and helpful, but again, somewhere down the line, the communication about "no onions" was lost. I also liked that you could also see what they were doing on the counters since they installed mirrors for customers waiting for their meal.
The fries were good, but I'm glad I didn't pay $3.95 plus tax for them. They are also double fried, so I don't think it was the healthiest choice on the menu.

If I see the truck again, I may be curious about their other offerings, but will keep walking, as I don't want to overpay for big portions of rice with little flavor. They'll really need to put the Seoul back in their food if they want to charge NYC prices.