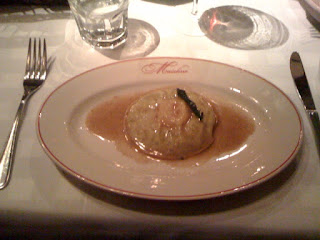 The campy furniture and the waitress made me feel as though I walked into a local Chili's or maybe even a Crate and Barrel catalog, but the food was remarkable at Danny Meyer's Maialino and worthy of some blogging here.

I started off with the raviolo al ouvo (pictured)- which, by the way, I thought would be more than ONE stuffed pasta piece, but guess what? I'm not fluent in Italian.... otherwise, I would have known that the "o" instead of an "i" at the end of the raviolo meant UNO, or ONE piece. But it was a large raviolo - and "O" my gawd - it was so incredible. "Ouvo" means egg - and it was RIGHT in the middle of the pasta, inside and cooked. It was like this little magic dream of yummy. The ricotta and herbs were just right for this delicate "primi" dish.

Yes. I know. The Italian names and lack of explanations on the menu were beyond annoying. Especially with the overly positive, happy-go-lucky waitress... not that I don't like friendly - but again, I already felt like I was in a chain restaurant with the overall decor - now it was like I was experiencing a server that worked previously at the Disney Store as a flippin' cast member.

I also ordered a salad - yes, again with another egg. It was good, but not that it hadn't been done before. It just wasn't overly good, terribly bad or worthy of additional commentary.

But the "Maialino al Forno"- wow! We ordered this along with the salad and the raviolo thinking that this was a main course for one. However, this dish was, to my surprise, dinner for two. Oh. Ok. Why not? We weren't that hungry, so splitting a meal sounded like a good deal. (I was dining with my significant other, who was also put off with Miss Happypants and her oh-so-lovely day in the neighborhood attitude.) The Maialino al Forno is a roast suckling pig with roasted potatoes - if you've been to Porchetta in the East Village (7th St. between 1st Avenue and Ave A), then it's kind of like that, but in a HUGE portion. We ended up taking the bulk of it home -where it tastes even BETTER on day two. We'll have it for day three, too. It was reasonably priced and well worth the money - since it lasted so long. (Did I mention that it was HUGE? See above and repeat to self.)

The pork was so aesthetically pleasing and had such a tremendous, captivating aroma that the table next to us (a party of 4) ordered it because they couldn't resist. You could hear our arteries collectively screaming in our corner of the restaurant. The dish is really not for the weak at heart. No pun intended - I'm being serious. It's a bit on the fatty side - but it's certainly the freshest, most delicious pork rind I've ever had, too!

The wine list was mediocre and we really felt like we were being pressured into sampling a particular vintage. To be totally honest, after being to other establishments with fine wines and sommeliers, you kind of get to know when you're getting a sales pitch -and that the waitstaff is being pressured to get something out the door. Oh well. The food made up for it.

So if you want a heart-clogging, but amazing dinner direct from the pages of a furniture catalog- I wouldn't hesitate to go back here. I just would prefer less pressure from the Disney characters that are serving and a menu that is more descriptive in "inglese"!
1 comment: 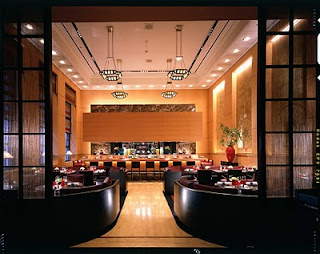 Trust me, dear readers, while the name of this restaurant is weird to pronounce, the food is simply magnificent.

In one sentence: L'Atelier de Joel Robuchon at the Four Seasons in NYC is simply mahr-velous.

And let's face it: I do NOT say that about everyone. Only those places that deserve the positive recognition, get it on this blog. (If the place is bad, they get THAT recognition, too.) No mincing anything. Especially words.

Ok. So....when we arrived, we were seated right away and treated to a nice spot at the counter - which I personally enjoy more than being at a table or seated in a banquette. Why? Because I sincerely love watching the kitchen prepare my meal and experiencing the action. At the table, you're a guest. At the counter, you're a diner. It's more interactive and the staff is extremely attentive.

Speaking of staff, If you're REALLY lucky, you'll have Sandjerma at your personal service. The best part about this restaurant is that the staff knows the food and the right beverage that you should order. You'll get the perfect pairing for your various selections. Even if you don't know what to order, just ask for a recommendation. In my case, Sandjerma knew what went along with what and every course came out of the kitchen on time, exquisitely presented and was an incredible culinary experience.

A few suggestions from the menu:
Desserts won't disappoint either. If they did, I wouldn't be saying such nice things. When I was there, we ordered a sampling of various sweets. All of them were unique and amazing. I don't have a favorite to share - just GO there. Try something. Ask if they have something to recommend. If not, close your eyes and just point your finger on the menu somewhere! Just don't do it too much, or your bill will be worthy of taking out a Home Equity Loan. ;)

Certainly, this is not your everyday dining locale, but it's a special occasion spot that is most memorable. And FYI: If my special someone is reading this, he knows that I'm ready to go back ANY TIME (Hint! Hint! DOUBLE hint!)
No comments: