DBGB: For the Scene and the Cuisine 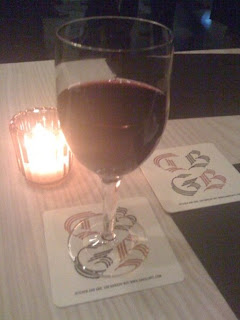 Admittedly, once you've been to Daniel Boulud's other restaurants, you have a high expectation. Period. From Cafe Boulud, DB Bistro Moderne, Bar Boulud and the infamous 4-star restaurant Daniel, it's just all French goodness. That's it. It's exquisite service combined with marvelous food. 5 Daniel restaurants all in NYC - a place to go every weeknight! (If you have deep pockets!) Let's focus on one not-so-denting-to-your-wallet location that is sure to be a City favorite for a very, very long time....

DBGB Kitchen and Bar takes things to a different plane. And no, I don't mean that the food tastes like airplane food. For God's sake, NO! What I'm trying to convey is that DBGB has a flair and a scene combined with the gourmet pleasures one would expect from a place with Daniel's name on it.

Sure, the place has been written up by several bloggers and other foodie rags - and there's a reason why most everyone likes it: there is so much on the menu that there's literally something for everyone. That's maybe the only "bad" thing I have to say about DBGB... is the overwhelming menu! There are a lot of choices! Here's my personal recommendations after dining a few times in this hotspot:
PLUS! If you like beer -and even if you don't... there's probably a beverage of choice that might just have you tasting some of the most flavorful ales, draughts, or bocks you ever had. Just be sure to ask for Colin - the in-house wine and beer director. He knows his drinks like none other.

The desserts are like the food menu: plentiful! If you've never had Baked Alaska, this is THE place to try it out. Presentation is everything and it seems like a birthday party is going on whenever someone orders it. There's also plenty of sundaes and other sweets that will satisfy the most discerning diner.

And honestly, the only "real" downside to DBGB is that I think everyone wants to be here at the same time. And people, for the most part, are loud when we're in groups. The overall set up of the space is very conducive to projecting and elevating loud noise. It's not first date material, but it's a place to go with friends and family or date #2. It might be helpful if you know some American Sign Language as you have a discussion, though.

Each time I've been to DBGB -and it's been numerous- there are always celebrity spottings. It's a scene and a cuisine that I would recommend every NYer to give a try. Just stop going on the nights when *I'M* there.....Ok? Thanks.