The Cupcake Wars: Butter Lane is STILL the Best! 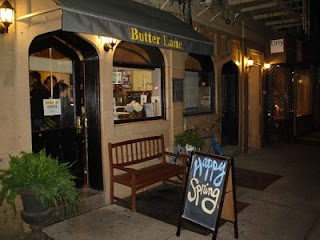 If you HAVEN'T had a Butter Lane cupcake, then you're really not enjoying deliciousness at its best.

Read my previous post- you'll see that I tried the gluten-free BabyCakes NYC (egads, never again - not for cupcakes!) and even went over to Magnolia Bakery recently - which, trust me, is NOT even close to Butter Lane. Not EVEN.

Magnolia Bakery is apparently where the whole cupcake crusade got started here in the Big Apple - but it won't END there! (Thank the deity of your choice!) I mean, they put sprinkles all over their cupcakes. Why? Hell if I know! It doesn't help them taste any better.

I found their cupcakes disappointing. I really did. Not like the wildly waxy world of BabyCakes, but I thought that it was beyond ridiculous to get a cupcake from Magnolia's little "self-serve" table AND THEN they have the AUDACITY to have a TIP jar? For what???? They didn't even put the dang overly-sprinkled sugar confection in a box for me. It was done by ME. They should tip ME for the effort -or give me a self-serve discount! And how about the germs that are spread with this less-than-sanitary way to serve cupcakes? You pick out your cupcake with your HANDS (that probably weren't sanitized since your cab ride) and put it in a box. Meanwhile, Nancy Nastyfingers and Sammy Scummynails are touching and prodding every cupcake in the containers -licking their fingers after each one. Ewwwwwwwwwwwwwwwwww!

Don't even ASK me why I still selected two cupcakes!??! I will, however, mention that I chose 2 items from the containers not handled by the Germinators - and in the far corners - where they looked relatively untouched. As if that would have helped.

The icing was sub-par and again, do I need to mention sprinkles? C'mon! I'm not 3 years old any more! Give me a good cupcake with incredible flavors and top-notch ingredients and you don't need to do the aesthetics.

So... again, I mention Butter Lane in the EV as my favorite. I challenge anyone to find me a better cupcake at this point. Don't even TRY to mention Crumbs or Junior's! They should be left to the city's rodent population. (I am pretty anti-chains anyway....)

Anyway, I am currently checking on the two-for-one offer given to those who MENTION NYCFOODIEGIRL when they go into Butter Lane during the month of February. They are offering a great deal to anyone who mentions this blog post.... which, if it were possible, would make me an even BIGGER fan of their delectable delights. And they do not know me... I'm no Gael Greene, people! This blog is 100% anonymous. I give 100% bias-free reviews. I will attest that "Butter Lane is the Better Cupcake" -whether or not 2 for 1 deal is authentic (I'm pretty sure it is, so stay tuned for an update!). But, I think it is, so MENTION NYCfoodieGirl as the place where you heard about Butter Lane! :) Keep in mind that they deliver and are located at 123 East Seventh Street, New York, New York 10009 (p) 212.677.2880.