How to Get Your Cronuts: A Strategy 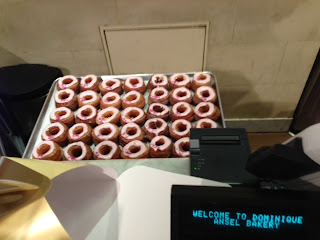 There's been so much press surrounding the Cronut, that I really don't know where to begin -or to tell you anything you don't already know or haven't already heard. But I will tell you how you can get one of these yummy babies if you have a moment...

Quite simply, the Cronut (capitalized because it is worthy of a proper noun, plus, it's trademarked) is the perfect marriage of a delicate French croissant to a frosted American doughnut. The resulting offspring is this flaky sweetness with melt-in-your mouth gratification. And you can only find it in one place: NYC at Dominique Ansel Bakery, SoHo. 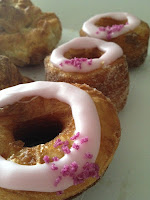 As can be imagined, this exquisite pasty creation is finding its way onto many a bucket list. People who normally don't crawl out of bed until after lunch time on a weekend, somehow manage to get a spot in line before the bakery opens at 8am to grab a coveted Cronut before they sell out in a half an hour. This line is practically an ongoing daily routine - no matter what day of the week.

The overwhelming response is mostly positive albeit daunting for locals and tourists alike. There are long wait lines and I've heard that there are people giving the finger to the pastry chef when the Cronuts are gone. Really? Can you imagine giving someone the finger when they don't get what they want? In NYC? Who would think to behave so poorly? (Insert sarcastic shake of the head here.)

All it means it that there's another day they'll need to get their sorry asses up early... Or here's a strategic tip for you: PRE-ORDER. Give them at least 1 week notice and call to have them put aside your pastry perfection. Planning is everything and at least you won't have to give anyone a one finger salute because you're cranky you couldn't get your Cronut fix. (And Dominique is really too nice of a guy to be dealing with inappropriate reactions of jaded customers... plus, the DKA is also a fantastic dessert, too. No need to get knickers in a twist, people - there is a reason that chef was nominated for a James Beard award. His pastries don't suck.)

My only question is when will the beloved Cronuts go national? When will we see them in Boston, Chicago, Austin, Miami and LA? Most importantly, when will a chocolate version be unveiled? How about mini versions? 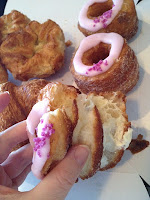 Or how about a calorie-free version?

I admit, I ate 3 of them all in one day. I mean, I HAD to. In case you're wondering: When you get a Cronut, their shelf life is very limited. I would be doing a disservice to allow the pastry to sit around for a long time without being properly consumed. It's really a matter of integrity.