Crispy Chicken Feet and Churros: Murray Hill Might Be Trendy After All

Seriously, the girl in the picture is not drunk. She is, however, having a very good time with the crispy chicken feet at Salvation Taco on 39th between 3rd and Lexington.

Finally, in my neighborhood, there's a fun, trendy site to grab a bite to eat, in a space that is really different from everything else in Murray Hill. (Normally, I don't admit that I live in "Murray Hill" name and use "Midtown East" instead - it's just THAT uncool...)

Salvation Taco is a bit quirky. It has a ping pong table in the back lounge area and there is a cool vibe to the place. Again, much different (and welcome) to the 'hood.

It's also a part of the new Pod hotel - which has its own youth hostel-esque thing going on... But it doesn't distract too much from the restaurant/bar.

It's hard to put the menu into words - some is a bit on the salty side, but it's to be expected. But to call this place a Mexican restaurant would be wrong. It's really not. I mean, it has some Mexican inspired food, but it's a spin-off and more refreshing. Crispy pigs feet and the aforementioned crispy chicken feet are savory nibbles that one should at least try. I, personally, could only manage a miniscule bit of a chicken toe, but can fully devour a pig's ear. It was a big hit to order them for the table and they make great conversation pieces (see photo above for case-in-point).

I also enjoyed the Korean BBQ taco and the Morrocan lamb naan. Each are served as single (not really shareable) portions, and are completely delicious. The group I dined with also ordered the Jacob's Ladder Feast -which was really for about 3 people. It was a healthy portion of pickled veggies, sauces, corn tortillas and a large short rib. Everyone seemed to enjoy picking at the bones and making their own tacos.

Drinks were also good and plentiful. Two of us ordered the 5 Island Horchata, and, without ruining it, you should really just order one yourself. Have your camera ready when it arrives to your table, too.

I'd recommend this for a stop over anytime you're looking for a small bite to eat and a drink. I've been there for lunch and dinner, although I hear there's breakfast, too. Who knows, with it being so close, this place could become my "local". Oh - and try the churros with dark chocolate ganache with a nice cup of French press coffee before you leave.

P.S. If you're interested in the back story of Salvation Taco, it has to do with Chef April Bloomfield of The Spotted Pig and The Breslin team. Google it when you're there (there are iPads with free wifi in the lobby of the adjoining hotel). But go there. Keep it in business. It's very close to Grand Central Station, so there's no excuse to NOT check it out. Psssst! It might even make Murray Hill TRENDY! (Gasp!) Let me know what you think if you make it there - or at least, send an interesting photo of what you could do with crispy chicken feet. I'll post it. Seriously.
1 comment:

So it's 2013.
Here I am, a food blogger, making a real resolution to lose weight and get in better shape.
Yes, I know. What's the point? It's not right on so many levels, but it's the truth.
I was even supposed to go to a yoga class tonight, but I didn't have the motivation. Maybe tomorrow night will be more inspirational. You know, like the instructor has us do a zen pose and then we all get a bite of chocolate to collectively celebrate the flexibility.
Sigh. I know, I know. That's not how it works.
But really.... I know I ran out of excuses to not be in better shape. My baby boy is almost 2 years old now. I can't say it's just "baby weight" anymore. It's time to get serious about exercise. 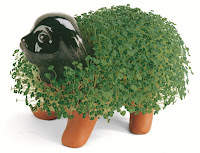 Now, I'm counting my calories and checking out various detox products. I am drinking a lot of water, tea and kombucha with chia seeds.
I swear, I can't help but hear that damn commercial in my head each time I take a sip: Ch-ch-ch-chia! If I begin growing a chia pet in my intestines, someone is getting sued.
If anyone has a better idea other than Zumba (which I heard is supposed to be like dancing fun disguised as exercise) and consuming green juice that tastes like freshly mowed grass with fertilizer, let me know. NYCFG needs a plan. Now.