My Latest "Steak" Out

The moment I opened the door at 6:15pm, it was a lively crowd. We just arrived at Empire Steak House.
I had a sigh of relief, because when you dine out with a toddler, the last thing you want to hear is a pin drop. Noise is GOOD. Parents like noise when they go out with their kids so we don't stand out like an 80 year-old grandparents at a Nickelback concert.
On the other hand, as soon as the very friendly and attractive hostess gathered our menus to take us to our table, I knew immediately what the majority of their client targets were: Men. Yes - she was pretty and slender, but as a mom (of not just a toddler, but of two daughters, ages 18 and 20), I couldn't help but feel a bit awkward... I wanted her to put on some clothes that were properly sized versus a short-short dress that left very little to anybody's (male or female) imagination. It was a booty show with heels all the way to our table. I felt like I should cover my baby boy's eyes -but he was more interested in the new place with all the people since we just got there, so he didn't pay any attention. I was spared having to deal with a mini-gawker -at least on that evening. (The other men at the surrounding tables appreciated the view, however!)
The really nice thing, is despite her mode of (mini)dress, again, she was very friendly and was completely open to wherever we wanted to sit. As a parent with a little one who needs a high chair, again, I find that top-notch! We went with her location recommendation -as we just wanted to ensure that we wouldn't be in the way of other customers or waitstaff. Believe me, we know that it is not easy for anyone to maneuver around a highchair with a child that has octopus-like arms with the dexterity of a blind man playing a game of chess.
So far, so good! (Another sigh of relief!) 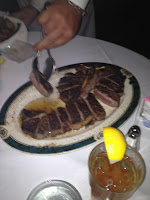 And P.S. - I can honestly say that I really didn't need dessert -especially after seeking the skinny, attractive hostess before departing the restaurant...