It was a fantastical foodie weekend -spent time at Gotham Bar & Grill, Boulud Sud and Riverpark. Looking back at these dining experiences, they are all so very different. Let me start off with one and work my way through....

Gotham Bar & Grill was recently awarded a 3-star review by Sam Sifton of the New York Times. I have a real hard time with that. Why? Let me list the ways:
I could list other annoyances (e.g., no music was being played so it sounded more like a diner than a fine dining experience), but I'll keep with those written above so you can  get an idea but hopefully not get too turned off.

Overall, Gotham has the potential to be a very chic place to dine with the quintessential NY experience. The location is cool and they do have a decent chef. They just aren't 3-star worthy. I think Mr. Sifton must have been sipping on a lot of mimosas that evening and dulled his taste buds, eyesight and sensibilities.

However, on the other hand and worthy of some star-age soon, Boulud Sud is certainly worthy of another look (as is the adjoining take-away "Epicerie" - get your hands on the chocolate macrons and you'll never be emotionally the same). Although I do not care for the space or the decor of Boulud Sud, the menu is very appealing and trust me, I've tried so many of the dishes that I could be a member of the waitstaff by now!

You should try the  Tomato and Sheep's Milk Cheese -Ricotta and Oregano Pan Con Tomate Grilled Manouri and Tomato Confit as an appetizer. Don't get it to share! Ok, maybe... but I like to keep this on my side of the table with some of the extra flatbread that is served. Three letters: OMG. I love the quail as a main dish, and the Waygu beef is beautiful, too.

It's one of the newest restaurants from Daniel, so you shouldn't be disappointed. They know what they are doing in the kitchen and the wait staff is trained to be of helpful service. I really appreciate that!

Speaking of appreciation,.... I've already discussed Riverpark -but hadn't been there for brunch. This place was busy, so I guess that is a good sign that business is doing well. I'd only recommend that when they expect a bigger crowd, the waitstaff should be prepared. It seemed like a struggle for them to keep up and they had a problem keeping up with the demand. However, the food was delicious as always and the outdoor space is now open. Talk about a gorgeous city day! It was the place to be and I'll request a chair out there next time (after allergy season is over and done with, of course).

So there you have it. 3 restaurants over the 3 day weekend - but twice the charm. ;)
No comments:

Falling Flat on its Face in the Flatiron: A Voce

You know... it's hard to write a good review when the trend seems to be going pretty poorly.

I've recently gone to A Voce on Madison Avenue and to the one in the Time Warner building. I seriously will never, EVER go to the location on Madison again. Not ever. I even wrote a message to management via OpenTable.com that went UN-answered. Wow. Really?

I wonder if Chef Missy Robbins even heard the valid complaints? 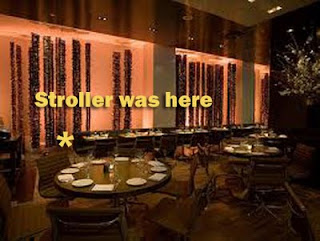 Anyway, I made a reservation with notice about coming in with a stroller (which, yes,  I KNOW a stroller is not the most convenient, so I warn any restaurant ahead of time so that proper accommodations can be made -and this location has plenty of space to make it easy on everyone -from waitstaff to customer) -but that made no difference. You can see that we were placed in a decent area, as the table to the left was our seating area... keep reading and you'll shake your head too, I promise!

On the reservation, I also made a note to let the servers and staff know of a food allergy -to which they completely ignored. Thank goodness that we're used to dining a certain way, because a well trained staff makes sure to NOT serve bread to someone that could pass out or die if they eat it! (You'd think, right?!)

Ok... so our evening still, somehow consisted of being placed in an area that warranted a lot of foot traffic, although by the photo, you'd never know it. Apparently, there are extra chairs that are hidden behind that campfire looking background and behind our banquette.

Within 15 minutes of being seated, and in related yet separate incidents, a chair was promptly and rudely removed from our table of 4 (we were three and I had used the extra chair for storing a purse and the diaper bag). I had to remove my belongings and it was all very awkward - as there was a waiter impatiently needing the chair (why it needed to be from our table instead of an empty setting, I'll never know!). People stared from other tables as a chair was removed from next to me, over to a corner location. I felt like I had bad B.O. and an infectious disease or something.

Later, another server BUMPED my baby in the stroller (and my child WAS sleeping soundly) to take yet another chair from the area behind us. He lifted this UP and OVER my baby AND over a seated pregnant woman's head! Oh -and there was also this big, huge dust bunny flowing down from the chair leg....! I'm NOT f'ing kidding. Wish I was. I was just horrified and shielded my baby in his stroller from being bumped or squashed by this Neanderthal without a clue.

Later, yet another server attempted to move my baby in his stroller, without any explanation whatsoever. I said, "No! Do NOT TOUCH my child!" It was only AFTER he failed to MOVE my baby on his terms that we learned that the dumb asses still needed more chairs from the storage area. How about SAYING something first and not creeping up on a mom with her stroller... attempting to move him on your own accord? One word: DUH.

It was HUGELY obvious that the room was NOT set for dinner properly before guests arrived. They took no care to know how many covers they expected that night and things were simply chaotic from the moment we walked in. Where was the General Manager?

To even make it worse, the waitstaff did not know the dishes well, so they were pushy on an appetizers that we clearly did not want. And by pushy, I mean that I felt like I was at an Applebee's or some other sh!thole of a restaurant that want to sell me an something before it went bad in the refrigerator. A serious re-training of the waitstaff and front of house will have to occur -and a whole re-tooling of the management is also in need of a serious look if they can manage to keep their heads out of their butts for five minutes.

The whole 'tude of the place was just out of sync.

Beyond the exceptionally poor service, came food that was sub-par. I know Chef Robbins' food to have dimensional flavors. This is why people like Jerry Seinfeld and Madonna took our seats (because I SAW THEM COME IN when we dined at the Columbus Circle location)! She's good and she's known for her cuisine... but the Flatiron location of this A Voce left me saying, "A VOID."
No comments: